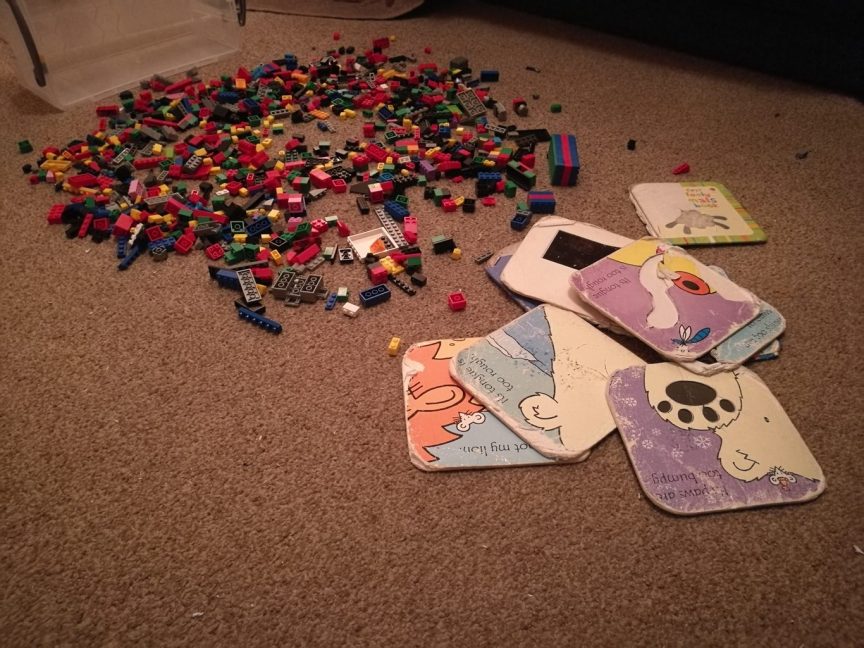 It certainly sounds like a funny story when I say it out loud. I like to refer to our son as Little Mr demolition because of the things he leaves in his wake. In fact, you could go as far as saying

Ever since we had kids, it’s like a demolition squad has hit our house

Before we had kids, my wife was very house proud. Everything had its spot, and I often got told off for leaving things around.

Don’t leave that cup on the table, go take it into the kitchen.

That was a common sound heard in my house. Everything had its place and mine was in my den room (I used to call it that, it was the spare bedroom in reality).

Then we had kids

Then, we decided to have children. First came our daughter. Now, she wasn’t really that messy. Yes, things used to get left around but often other parents would come to our house at that time and say “How do you keep it so clean? Wheres all the mess on the floor?”. Some would have thought we didn’t let her play; she did but we used to (or should I say my wife) clean up behind her.

She used to make a little mess but we could handle that. Then came along little Mr. Now, in our previous, ouse he was just a baby. We moved when he was just 1 year old; and so not much mess. We moved to our current house where the floor space is greater.

At first, he never played too much. This was one of the reasons we ended up going for a diagnosis – although there obviously were other things, other reason of why we did – which obviously were valid and good that we did.

So, at first not really much mess. We were able to clear up and keep nice.

Then he made a mess

However, he has grown and grown. As he has he started to investigate and play. He has quite a lot of sensory needs. He chews, particularly furniture. We ended up replacing our sofa every few years now.

He also likes to drop things through his fingers. The best fun stuff for this is lego. Yes, a nice big tub of lego that manages to get all over the place. Often I walk into the front room, step on some lego and go hopping around.

The thing is; we’ve come to accept it. We find short times (when they are in bed sleeping or at school) where the house can be tidy. Then the wrecking crew comes home and in 5 minutes things are everywhere.

The moral of the story is, kids will be kids. Just let Little Mr demolition do his things; have his fun. Then tidy up when they are sleeping and enjoy the piece while you can. Do you have similar experiences? Also, if you enjoy this little fun post; let me know and I will do more of the same.

I recently came across the following quote

“If you are always trying to be normal, you will never know how amazing you can be.”
― Maya Angelou

This site uses Akismet to reduce spam. Learn how your comment data is processed.

Hello and welcome to The Autism Dada. My name is Sean and I am dad to 2 children, one who was diagnosed with ASD at 2.5 years.

On this site I share all the things I discover as an Autism Dad as well as any info I think would be useful. So, join us on our adventure.

Blogger and general opinion giver. Love to dance around while singing badly.I'm also a parent Talking about #Autism, #AutismAwareness and #SEN

Flew to Wroclaw yesterday and flight was only half

Taken with phone and cropped a little. This depict

Walking along the harbour side on a lovely october

The lens I would choose for my entry is the Batis

Out and about at lunchtime. Even though later in t

It's sometimes amazing what your doorstep · · ·

Went for a wall in Weymouth yesterday #seaview #w

Taken last week when we had a fantastic sunset col

When your chilling out and nyst can't be arsed to

We use cookies to ensure that we give you the best experience on our website. If you continue to use this site we will assume that you are happy with it.OkRead more